Can we hide data in the Internet of Things (IoT)? Turns out: yes, we can! In this posting, I briefly summarize some of my own research conducted in last nine years. When we discuss information hiding in the IoT/CPS sector, we need to distinguish at least three different approaches:

Essentially, the IoT uses TCP/IP-based communication protocols while some more traditional CPS, such as industrial automation systems or building automation systems, use (at least partially) non-TCP/IP protocols, such as BACnet. Data hiding in TCP/IP protocols is not new and several publications already dealt with that topic, see our survey paper (accessible pre-print) for an overview.

However, there are certain specific protocols for the IoT/CPS domain and IoT steganography was already highlighted as a threat by us in 2014. The first research in the domain of CPS steganography that I am aware of was conducted by us and took place in 2011/2012. We have shown that one can embed several different covert channels in the BACnet protocol, which is a highly popular communication protocol for automated buildings around the world. One can exploit unused and reserved header fields in BACnet to signal secret symbols from a covert sender to a covert receiver. However, we also proposed a countermeasure for BACnet-based network steganography in the same paper by deploying a modified BACnet-capable firewall that ensures multi-level security (MLS). Afterwards, several additional papers appeared, especially covering IoT protocols, such as CoAP (paper on CoAP steganography by Mileva et al.) or MQTT (our recent paper on MQTT steganography and its follow-up paper on MQTT 5.0).

2. Storing Data Secretly Inside the Devices

A few years later, we have shown in this paper that one can rather easily store a few bytes of data in i) unused registers of CPS devices (e.g. sensors), and ii) in the state of actuators which then could be observed by a covert receiver. Due to the vitality of CPS, actuator state values are updated on a regular basis either by control logic loops or by human-introduced changes; we applied a device selection strategy to utilize devices which are used the least. To discover suitable CPS components, we used scatter hoarding – a strategy known from Biology. Therefore, we distributed small parts of a steganographic message over a larger number of CPS devices and selected especially these devices for the embedding which are rarely used or not used at all. Overall, it must be noted that the amount of data that can be covertly stored in the CPS is small, e.g. it can contain a message in the size of a cryptographic key within a single smart building, thus limiting the application scenarios for CPS-based information hiding in practice. However, future research might come up with new ideas on how to hide more data in a CPS.

3. Exploitation of Side Channels to Observe Surroundings

Side channels (passive covert channels) can be used to observe the physical environment of a CPS. For instance, in a smart building, one can observe whether a person is present in a particular room.

In my paper „Covert and Side Channels in Buildings and the Prototype of a Building-aware Active Warden” which I already presented at the IEEE Workshop on Security and Forensics in Communication Systems (SFCS) 2012 in Ottawa, I initially spoke about information hiding research for building automation systems. In the remainder I summarize the most important aspects of the paper.

A building automation system (BAS, cf. Wikipedia) is essentially a computer network containing sensors (devices which provide measured values, such as the temperature) and actuators (devices used to control something, like a heating actuator used to control the heating in a room). In other words, BAS are a typical form of CPS.

BAS use various protocols (containing own stacks) and thus make only limited use of TCP/IP. Sometimes they do not utilize TCP/IP-based protocols at all. My work essentially applies to different types of CPS, such as industrial control systems, too.

The question I wanted to answer is: Are Covert or Side Channels Possible in BAS Environments? Indeed, the answer for both questions is “Yes”.

Exploitation of Side Channels in BAS (and other Types of CPS)

The employee utilizes the BAS to obtain information about the presence of the manager in the room. Therefore the employee can request sensor information (e.g. temperature, lighting …) that describe the current situation in the manager’s office. If the lightning is turned off, if the temperature does not seem to represent the presence of a person in the room and if the heating is turned off, the employee can be relatively sure that the office is empty and that it is safe to steal the document at the moment. I consider such unintended information transfer as a side channel of the BAS (CPS).

For a covert channel communication, it is necessary to have an intentional sender in the scenario. Let us therefore imagine a situation in which we have a building with two rooms as shown in Fig. 1. 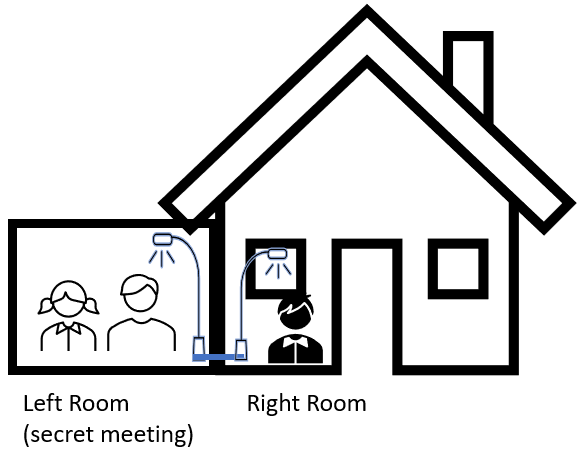 In the remainder I will show how above-mentioned works can be combined: The left room is closed and any network access in the room is deactivated. A secret meeting is taking place in the room and the results of the meeting have to be kept secret until the meeting is over. The security policy of the organization prevents any communication from the left (secret) room to the right (public) room. 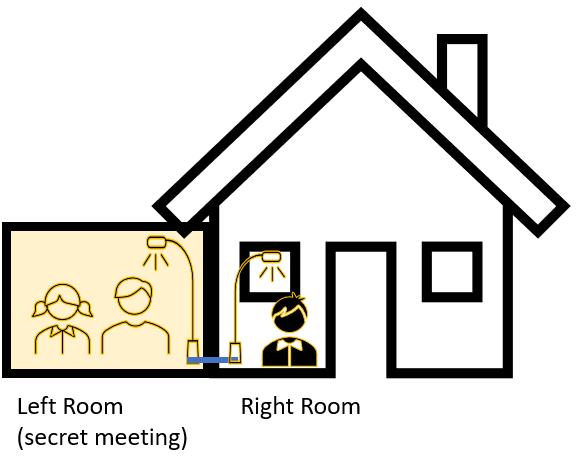 Fig. 2: A covert channel established in the BAS that breaks the security policy of the building.

Thus, covert channels can leak hidden information and can break security policies in building environments. The details can be found in my referenced paper above.

Preventing Covert and Side Channels

In above-mentioned paper, we also present a technique to prevent at least a subset of the possible covert and side channels in BAS. I therefore route all BAS commands of applications (e.g. smart phone applications used to control or monitor the building) through a middleware that contains multilevel security (MLS) and role-based access control (RBAC) support. Low-level prevention means are part of future work.